Ida T. Levenberg Sept. 10, 1914-April 27, 2009 The family of Ida T. Levenberg announces her passing into the hands of Christ on April 27, 2009, at the age of 94. Ida is survived by daughter Lynne, grandchildren Scott, Tracy, Marci, Ann, Larry and Tom and grandchildren Kristen, Eric, Lucas and Joey. Ida was preceded in death by her beloved husband Bud Levenberg and son Kerry Levenberg. Ida was born in Fresno, CA to Lawrence and Angela (Breda) Pedroncelli. After her marriage to Bud they relocated to Campbell, CA in 1936. She was involved with a local theater group called the Highlighters. She owned and operated one of the first child care facilities in Campbell, known as Tot-Lot, for over 40 years. Ida and Bud were past presidents of the Holy Family Retreat Association and very involved with the Catholic church. She received a commendation by the County of Santa Clara for over 50 years of volunteer service for register of voters. Ida was an expert seamstress and became a horticultural advisor through a Millpond Community newsletter. Ida was truly a talented lady who took interest in her community and devoted time to her faith. She will sincerely be missed by all who were fortunate enough to have known her. A memorial service will be held at St. Christopher's Catholic Church, 1576 Curtner Avenue, San Jose Ca 95124 on Thursday, May 7th at 11:00 a.m. 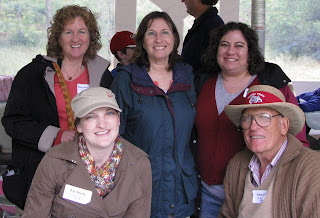 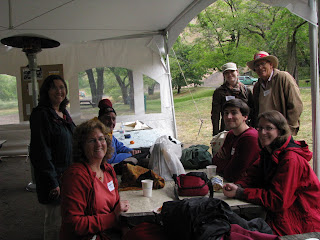 Pictured above, staying out of the rain: On the left, Mary Ann Golden Paloutzian and husband Tom in back, Margie Golden in the front. On the right, Liz Steele and father John Steele in the back, Jed Thoma and wife Maggie seated in front.

This weekend a few Steele family members gathered at the Black Diamond Mines Descendent's Picnic. The picnic is held every 2 years for desecendents of the mining communities that used to exist in the area. My great-grandfather, Andrew Steele, was born in Somersville. His father, John Still (later spelled Steele) worked in the coal mines.
John Still(18 Oct 1847-9 Jan 1912) married Rosa Rossi Turra(17 Apr 1860-18 Nov 1939)after her first husband George Turra died (on 15 Aug 1888). She had 2 daughters, Theresa and Georgie Turra, and at least Theresa was born in Stockton. Georgie was born after her father died (1 Jan 1889)and was apparently named after him. John and Rosa were married 12 Nov 1899 in Stockton. They had 6 more children together: Mary (b. 1890), John (b. 1891), Joseph (b.1892), Andrew (aka Chickie, b. 1895), Richard (b.1897) and David (b.1899). I have records showing that at least John through Richard were born in Somersville, CA. (David was born in Tesla, another mining community in Alameda county). Somersville no longer exists, but the site is located within the Black Diamond Mines Regional Preserve.
The family was living in Fresno at 1207 F St. when they were recorded in the 1900 U.S. census on 5 Jun 1900. 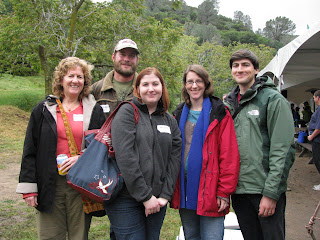 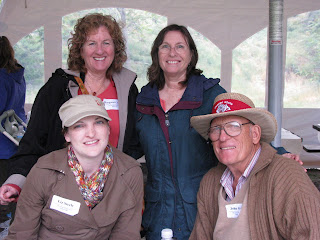