They came by boat 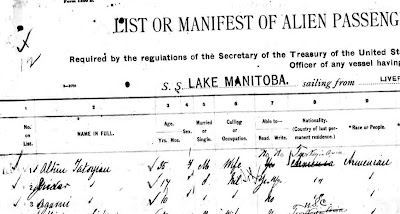 I do a lot of my research on Ancestry.com. The site has a huge store of records available and they are always adding more. Since new records are showing up on a regular basis, it is possible that records I haven't been able to locate just haven't been made available yet. Here is an instance of a record I have been searching for finally showing up! What a surprise to find an immigration record for Altoon, Goohar, and Aghavni Tatoian! You can see the record above. They arrived at the port of St. John, New Brunswick, Canada on the S.S. Lake Manitoba on 20 December 1903. Based on the record source, they likely crossed into the U.S. soon after through Calais, Maine. Here is a map of the area.
Interesting tidbit: Altoon means gold or money, Goohar means diamond or precious stone, and Aghavni means dove or pigeon.

Email ThisBlogThis!Share to TwitterShare to FacebookShare to Pinterest
Labels: Tatoian

Who is buried in Bethel Cemetery? 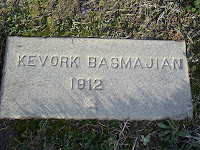 
Over my Christmas vacation, my mom, Joy and I tried to dig deeper and find some more obscure information. No, we didn't take shovels to the cemetery, only a camera. I called up the Sanger District Cemetery and asked about Mariam Keshishian, my great-great-great grandmother. They had records for a Mary Keshishian and an M. Keshishian buried next to eachother, so we went to check it out. Bethel Cemetery is in Fresno County out between Sanger and Del Rey. It is on Bethel Ave., between Indianola and Central Avenues. Here is a map.
The map in the Cemetery office shows there is an M. Keshishian buried next to Mary Keshishian. Out at the cemetery we found Manoosh Keshishian (1844-1925) in the M. Keshishian plot, and where Mary Keshishian is shown on the map, there isn't a headstone. I have never seen the name Manoosh in any records I have found so far. Now, Manoosh is a female name, and the dates are close to what I've found for Mariam, so there could be some confusion in the cemetery records (which are not original records). I have 2 birth years for Mariam from the 2 census records I found for her. In 1900, her birth year is 1845, and in 1920, her birth year is 1835. Her daughter Khautoun was born in 1856, so a 1835 to 1840 birth year is the most likely. Hopefully, there is some more information out there somewhere.
The picture above is from the same cemetery and is the headstone for Kervork (George) Basmajian (1848-1911), my great-great grandfather, husband of Khautoun. Even though the headstone says 1912, we know he died Oct. 10, 1911 because Grandpa Basmajian wrote it in his Bible. Thanks Grandpa!
on January 04, 2008 No comments: