What I know about Mariam Keshishian

In order find more information about my great-great-great grandmother, I needed to put together what I know so far.

I started with the 4 generation family photo dated 10 May 1920. This tells us she was alive in 1920 and in California.
1900 US Census
The earliest census record I can find of the family is in 1900. They are living at 6 Prescott Ave., Chelsea Ward 5, Suffolk, Massachusetts on 14 June 1900. Here are the details of the census record:

Mariam’s other children in 1900: Khatoun arrived at Ellis Island 7 Nov 1899 with her husband and 2 sons. In 1900 they were living on Main St., Paterson Ward 8, Passaic, New Jersey. Gadar crossed into the US from Montreal, Quebec, Canada in Mar 1907 with her children. Paul and Susie are living on Chestnut St., in Franklin, Norfolk, Massachusetts with Nish, Maron, and Yesneak, having arrived in 1894. I have no records for Arschalous.

1910 US Census (and other records)
I have no record for Mariam in the 1910 census. In 1910, Khatoun is living in Sanger, CA with her family. Jacob leaves Liverpool, England on 1 June 1900 with son Charles and arrives in Philadelphia with a final destination of 57 Central St., Milford, Massachusetts. where Paul is living (last name is now Kershaw). Gadar is living with husband and son at 139 Spruce St., Chelsea, Ward 4, Suffolk, Massachusetts. Susie and her sons are living in Watertown, Middlesex, Massachusetts. A 7 Sept 1910 naturalization record for Peter has him living at 4 Prescott Ave., Chelsea, Massachusetts with wife Mary. (His WWI draft registration card dated 12 Sept 1918 has him living at 230 Chestnut St., and his wife is Anoush (Peltigian) Both the 1910 and 1918 records have his birth date as 26 March 1874.)

1920 US Census
15 Jan 1920. Mary Keshishian lives on K St. in Sanger, CA. Her age is listed as 85. Khatoun and Paul live in Sanger. I cannot locate a 1920 record for Jacob, he might have died by this time, but I haven’t located a death record either. Jacob’s children Charles (Kershaw) and Lucy (is this Ester from 1900??) are both in the Sanger area. I cannot locate either Gadar or Susie in the 1920 Census, but their children are in Fresno County by this time. Peter, his wife Anoush, and children Ann and Mike are living in Massachusetts with Peter’s in-laws.

Death Records
The only death record I have been able to locate that is a close match is of Marry Kishisian, who died 18 July 1925, in Sanger, CA On the death certificate, her birth is listed as 16 June 1845. Amazingly, her parents’ names are listed, but the name of the informant is not. Her parents are recorded as Garabed Kiaetlian and Toma Ouchlookian. It says she has lived in California for 11 years (since 1914), and in the US for 17 years (since 1908). I don’t know if that is correct, because of the 1900 census record I have (I find it hard to believe that record isn’t of this family, too many coincidences). The 1920 Census has an arrival date that looks like 189_ (it is a bit blurry). Place of burial is Bethel Cemetery. This matches up with the cemetery records at the Sanger district office, which manages the Bethel Cemetery. They have records for a M. Keshishian and a Mary Keshishian, seeming to indicate that there are 2 plots with Keshishians. At the cemetery, there is only one headstone, and it reads, “Manoosh Keshishian, 1844-1925”. Here is the entry on that subject, with pictures. 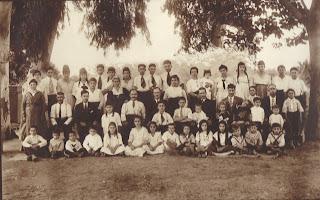 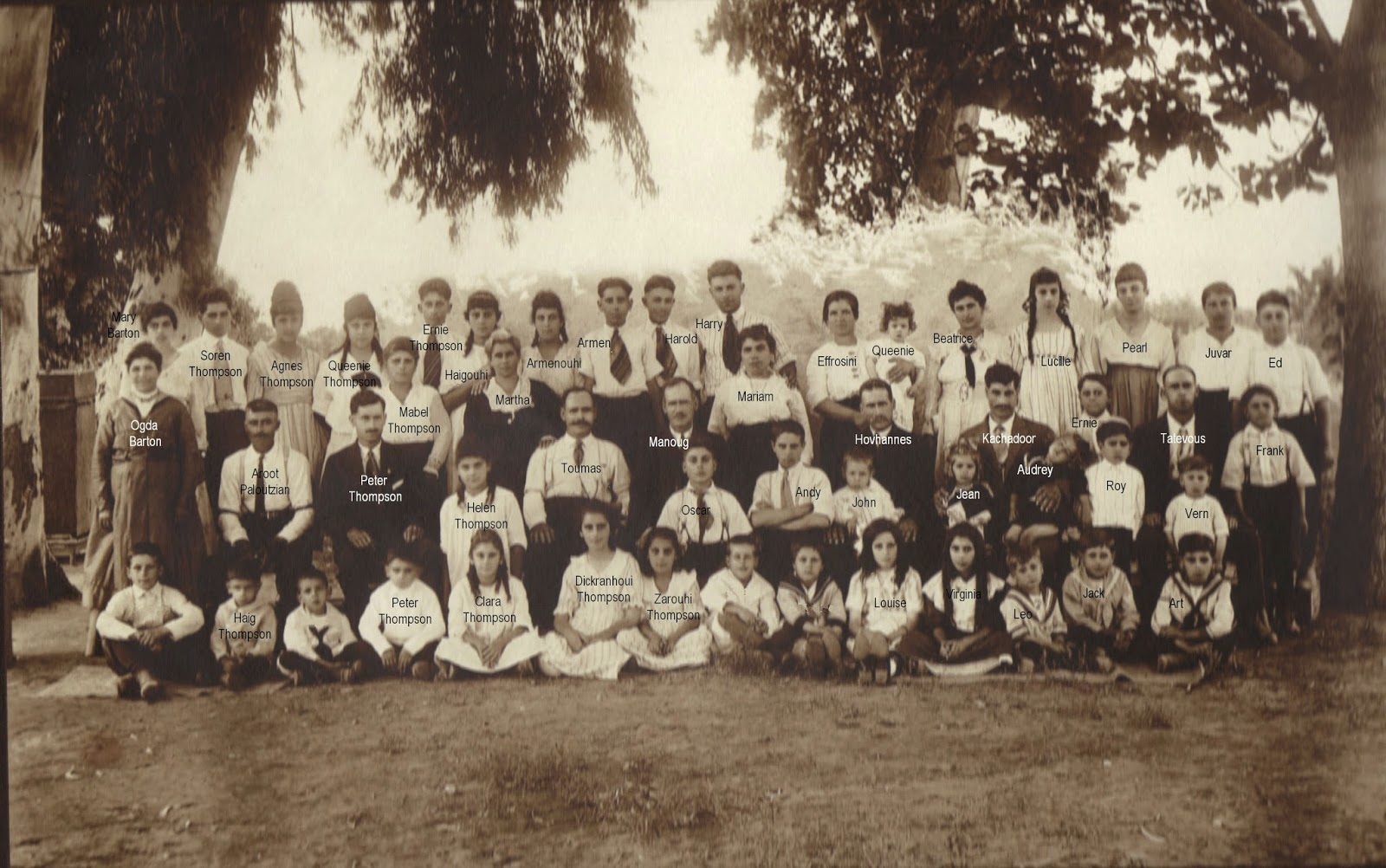 Just saw that I made a mistake in this photo.  Dickranouhi and Zarouhi in the front row are not Thompsons.  They are Toumas' daughters.
on October 27, 2008 1 comment:

I am so excited!!
I posted on the San Joaquin Genealogical Society's message board on Ancestry, and after exchanging a few e-mails with Sandra Hoskins, she was able to locate the following information:

More to come as I add this information into the family tree!
on October 08, 2008 1 comment:

Karabians Donate Scrapbooks of Clippings on Armenians from Fresno Bee
SARAH SOGHOMONIAN-STAFF WRITER
Scrapbooking has become a popular hobby in recent years.
People make wedding scrapbooks and scrapbooks of their child’s school years. I made a scrapbook filled with my high school memories.
Satenig Karabian began her scrapbook way before it became trendy. In 1930 she began clipping every article out of the Fresno Bee that featured Armenians: marriages, deaths and news stories, Karabian collected them all. Every time she clipped an article out the paper and placed it in her scrapbook, Karabian was recording history.
Karabian, who was born in Bitlis, Armenia, in 1903, came to America with her family in 1906. They settled in Fresno, where other family members already resided, and began their new life. Satenig married her first cousin Benjamin Karabian in 1930. They had no children. This allowed Karabian to become very close to her nieces and nephews.
Karabian, who kept her scrapbook current until her death in 1983, passed the three volumes on to her niece Elaine Karabian Garo and nephew Walter Karabian.
“I have preserved these pages and inserted the originals in plastic covers because I know how valuable they are,” said Walter Karabian, a former State Assemblyman from Los Angeles. “For our Karabian family, every time we turn these pages and show the pages to others, it becomes a wonderful journey down memory lane. Our aunt Satenig always remains in our hearts.”
Now the Karabian family is donating the beloved scrapbooks to the Armenian Studies Program at Fresno State so they can be scanned and archived.
“I trust Dr. Dickran Kouymjian and Barlow Der Mugrdechian to put them in the right environment so that they have the greatest access to anyone who is studying 20th century Armenian life in Fresno,” Karabian said. “I would like to have them available to Armenian scholars and the Armenian Library Museum of America in Boston so that Armenian scholars can access them.”
One thing that Karabian said is noticeable about the scrapbooks is that the farther back in time you go, the less coverage Armenians received by the Fresno Bee. “This shows that in the first half of the twentieth century the community was less accepting of Armenians,” Karabian said. As time went on the newspaper began covering Armenians more frequently, which reflected their growing acceptance in the community.
Satenig Karabian’s scrapbooks are one of a kind. Her love for Fresno’s Armenian community is evident when one looks at the meticulous care used to create the books. Fresno State is lucky to have such a rich piece of history.
_______________________

Benjamin and Satenig were my grandmother's cousins on her mother's side, and Walter Karabian is a second cousin to my father through my grandmother's father's side.
I have just received word from Barlow Der Mugrdechian of the Armenian Studies Program at Fresno State that the scrapbooks have been scanned, and that he will send me the images!! I can't wait!
Happy Birthday to my sister Jeanne!
on October 03, 2008 No comments: