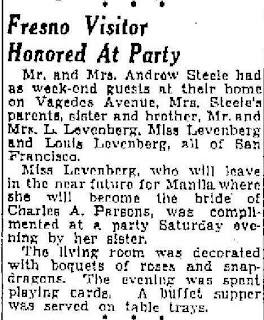 Elizabeth Terese ParsonsApril 24, 1911 - December 15, 2008 (97). Wife of the late Charles Andrus Parsons; mother of Charles "Cap"/"Shali" Parsons (deceased) and Lois Parsons Fragomeni; Grandmother of Justin Parsons, Angela Fragomeni, and Annette Fragomeni; sister of Claire Steele, Mildred Lloyd, Loretta Noel, Louis Levenberg, Francis "Bud" Levenberg all entered eternity before their sister; many nieces and nephews and extended family. Beth was a member of St. Emydius Church her entire life, St. Vincent de Paul, Legion of Mary and the San Franciscans. Beth was a native San Franciscan who ventured to China in 1935 to marry her sweetheart. She lived overseas until 1938 traveling between China, Hong Kong, Korea and the Philippines. She had to pack up a household 5 times to go cross country after her naval officer husband was reassigned. Beth's love for traveling didn't stop there, she traveled the globe into her mid 80's. Beth loved to play bridge and was a master player competing in tournaments here and in Hawaii. Although her hobbies and love for travel took her all over the world, she loved San Francisco best. Friends are invited to attend the Vigil: Thursday, December 18, 2008 at 5 pm at St. Emydius Church and the Funeral Mass: Friday, December 19, 2008 at 10 am at St. Emydius Church with burial at the San Francisco National Cemetery, Presidio SF, CA In lieu of flowers, the family requests donations be made to the American Cancer Society West Bay Region 235 Montgomery St. SF, CA 94104
on December 17, 2008 1 comment: