One thing leads to another

Anyone who has worked on genealogy puzzles knows how one piece of information can lead to a whole lot more. Earlier this year, my family and I attended the Descendant's Day Picnic at Black Diamond Mines Regional Park. At the celebration, the park staff had several huge white binders full of documents, lists and other information about the families who lived in the mining communities that used to exist in the area. My great-grandfather Andrew Steele was born in Somersville, along with his siblings. While looking through the binders I found an index or list that had church baptisms with Steele (or Still) family members listed. I just recently received copies of these documents. What I have posted are scans of photocopies of pictures taken of the original records of Holy Rosary Catholic Church in Antioch, CA. They are in Latin. There was a Catholic Church in Somersville called St. Patrick's, but I read that it was mainly used for Sunday masses.
John Steele - Rosa (Rossi) Turra marriage record 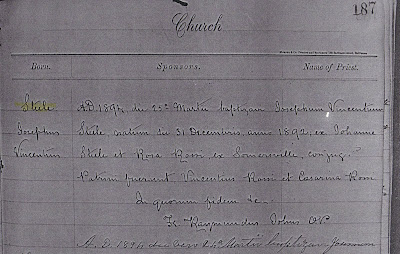 Joseph's record lists the names of his Godparents (Latinized, of course): Vincentius Rossi and Cesarina Rossi. I have found Vincent and Cesarina (and family) in the census records, living in Stockton. I think Vincent is Rosa's brother. An interview recorded and transcribed by staff of Black Diamond Mines Park of Richard B. Steele (and family) indicates that Rosa Rossi was brought to the U.S. by her brother, but his name wasn't mentioned.
John and Rosa's wedding record list ALL FOUR PARENTS' NAMES! (All the genealogists gasp). Both John and Rosa's fathers' names were written on their death certificates, but not the mothers' names. John's parents are written as Josephi Steele and Maria Rossi. (His death certificate says his father was John). Rosa's parents are written as Matheii (hard to read) Tura (sic) (her maiden name is Rossi, and Mathew Rossi is listed as her father's name on her death certificate) and what I think says Baptistima ________ (I cannot make sense of the last name). Note John and Rosa's son Richard's middle name was Baptist, and Joseph's middle name was Vincent.
So now I'll be trying to find information that connects Rosa and Vincent as siblings, and also trying to find any more information on both John and Rosa's parents (my great-great-great grandparents!)
on October 23, 2009 1 comment: