Are you done yet?

Friends and family who know that genealogy is one of my hobbies frequently ask if I am done, if I have finished my family tree. The answer is that I will never be done. The tree extends back in time as far as records can take me, and the family keeps expanding every day. I know of at least 4 people in my tree expecting babies this year. I also still have dead ends, places in the tree where I am stuck for lack of information. We also say goodbye each year to people we love. This week we lost my Aunt Ida Pedroncelli Levenberg (10 Sep 1914-27 Apr 2009). She was married to Joseph Francis Levenberg, Uncle Bud, who was the younger brother of my great-grandma, Claire Davidson Steele, known as Mammy to her grandchildren and great-grandchildren.
I have wanted to post the family tree here on my blog, but haven't been able to find a format which allows it to be easily read and understood. It is too big! Also, since it is always changing, it can only be a snapshot of any point in time.
So, for anyone in my tree who would like to have it, I will e-mail you either a Simple Register Report or an Ahnentafel Report. The Simple Register Report uses a descendant-ordered format starting with an ancestor and moving forward in time to that individual's descendants. The Ahnentafel Report uses and ancestor-ordered format starting with one individual and moving backward in time to that individual's ancestors.
I can also do various chart formats; just let me know what you would like to see.
on April 30, 2009 No comments: 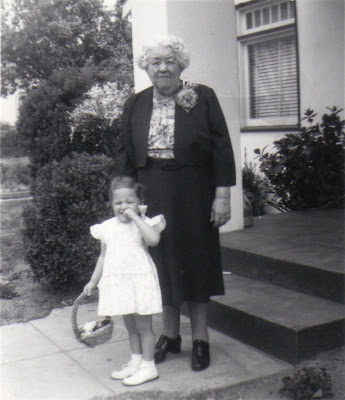 This is a picture of my mother, Mary Ann, with her great grandmother, who was called Peeps.
Peeps was born Elizabeth Agnes Doherty on July 9, 1870 in San Francisco, CA to Ann McLoughlin and Rogerty Doherty.
She was married to Ewen Davidson, and had a daughter, Claire (Mammy to her grandchildren and great grandchildren). Ewen died, and she later married Louis Levenberg (Pop), after his wife, her sister Lily, also died. (Lily and Louis had 2 daughters, Mildred and Loretta). Peeps had 3 more children, Joseph (Bud), Elizabeth (Beth) and Louis (Lou).
Peeps died July 21 1949 in Fresno, CA. She is buried in Holy Cross Cemetery in Colma, CA.
on April 12, 2009 2 comments: 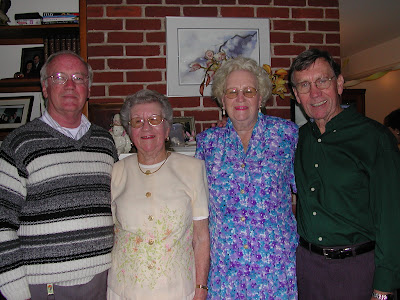 Happy 88th Birthday today to my Grandma, Betty Golden! This is a picture from her 80th birthday party with her sister and brothers. From left to right, Don, Betty, Bernadette and Tom. If you were at the party in Fresno that day, you might remember that it snowed!!
Also, a happy 25th wedding anniversary to John and Maureen Golden, my uncle and aunt. This picture was taken at my parents' house when they were first engaged. 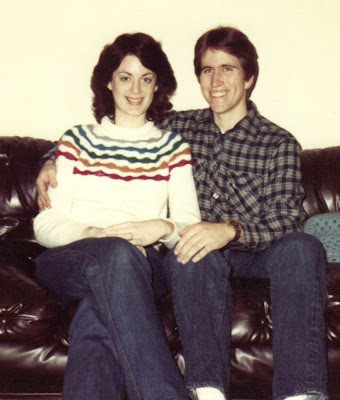