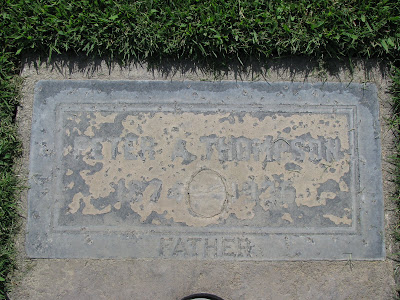 This gave me the married names of his daughters, and that he was buried in West Selma Cemetery. So, I wanted to find his headstone. On my way to Kingsburg, I stopped in Selma at the old section of the cemetery at Floral and Thompson. I didn't have the grave location, I just figured it was a small enough area that I could find it. Well, I wore myself out pacing up and down the rows of headstones .As you can probably guess by the title of this entry, and to make a long story shorter, I was at the wrong cemetery. I even went back there, with my sister Joy, a second time after calling the cemetery office and getting the location of Peter Thompson's grave, still thinking it was the West Selma Cemetery. The cemetery at Thompson just south of Floral is North Selma Cemetery. I was looking at a USGS map in my office one day when I noticed the other cemetery, also on Thompson Ave., which is actually the West Selma Cemetery. It is south of Highway 99 on Thompson near Park St. This is where Peter Thompson and his wife Mabel are buried. Their son Haig is there as well. He was a flying instructor who died in a plane crash at the age of 33.
on August 24, 2009 1 comment: 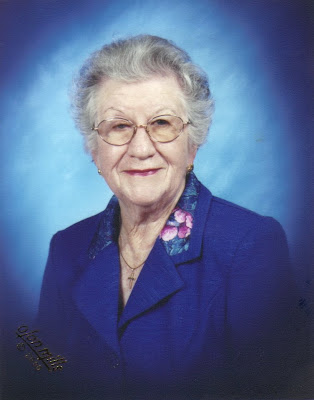 Jean Elizabeth Golden
Our beloved mother passed away peacefully on Friday, July 31, 2009. She was born April 7, 1921, in Fresno, California to Andrew and Claire Steele. Betty graduated from St.Therese school and from San Francisco College for Women. She married Robert Golden in Fresno in 1944. They established Golden Insurance Agency where Betty worked for 40 years. Betty was a lector and Eucharistic Minister at Our Lady of Victory Parish. She was a member of Third Order of St. Francis, YLI, Serra Club and a volunteer for Catholic Charities. She was preceded in death by Robert, her loving husband, of 54 years; her brother, Br. Andrew (Don) Steele, FSC; and her grandson, James Stone. Betty is survived by her nine children and their families, Mary Ann and Tom Paloutzian, Susan and Don Sturges, Bill and Shirley Golden, Catherine and Jerry Johnson, Margaret Golden, Patti and Tom McMurry, John and Maureen Golden, Janet Golden, and Michael Golden; 26 grandchildren, and seven great-grandchildren; her siblings, Bernadette Steele and Thomas and Anne Steele; her sister-in-law, Virginia Golden; and numerous nieces, nephews and cousins. Visitation will be held at Whitehurst, Sullivan, Burns & Blair Funeral Home, on Thursday, August 6, 2009, from 4:00 to 7:00 p.m. followed by Recitation of the Holy Rosary at 7:00 p.m. A Mass of Christian Burial will be celebrated at Our Lady of Victory Catholic Church, on Friday, August 7, 2009, at 1:30 p.m. Interment will follow at St. Peter's Cemetery.
on August 10, 2009 No comments: