In February I wrote about finally finding Bert Church's death record. You can read about that here. Bert was the husband of Mary, the sister of my great grandfather, Andrew "Chickie" Steele. Bert and Mary didn't have any children of their own; Bert had a son from his previous marriage. I hadn't been able to find a death record for Mary, nor did I have her birthdate, and I have just been so curious about what happened to her.
So one day several weeks ago I got the bright idea to call up the cemetery. I was home from work early, and now I had Bert's full name and birth and death dates. I just made an educated guess and called the Holy Cross cemetery office in Fresno. They actually have access to the records for all three Catholic cemeteries. And, yes, Bert Church is buried at Holy Cross, in section D, plot 68, #7. So I asked about Mary, and yes, she is buried "next door" in #8! I asked for her death date; she died 24 Aug 1968, 4 days after her brother Andrew. I still can't find her California death record, so maybe she didn't die in California.
on April 20, 2008 No comments:

This is a picture of 511 Cherry St., Anaconda, MT. The 1896 Anaconda City Directory tells us that Frank Dolan (and, I assume, his wife Winnie and daughters) lived here, as well as John Henry Golden. Several boarders are listed as living in the rear at this address. Frank's occupation is bricklayer with the Anaconda Copper Mining Company. John Henry's occupation is clerk for Joseph Peters. The Joseph Peters entry in the directory reads: clothing, boots, shoes, gents' furnished goods, hats, caps, gloves, underwear, etc. 24 Main .
on April 16, 2008 No comments: 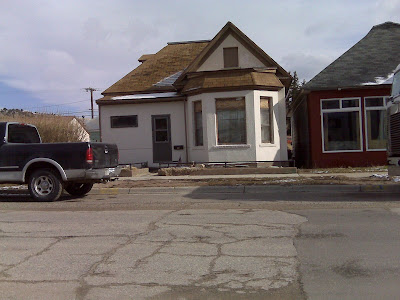 When I saw your latest update on our Grandfather’s address in Anaconda, I sent it to a co-worker who lives in Anaconda. Turns out she lives a couple of blocks away! She took these pics today and sent me some information. She is going to do some investigating on the house. She and her husband own a few houses in Anaconda and she is very familiar with the history. They have friends who have bought some of these old houses and renovated them to the original state.

This is the house where Grandpa Golden lived with his older sister Winifred, her husband, their two kids and his younger sister, Margaret, in 1900.
Pretty cool!
From my co-worker, who lives in Anaconda – just a couple of blocks away.
Here is a shot of your family’s house. It is a smaller house, w/a "smelterman's" cabin in the back - it was really common to rent those out to the men that worked at the Anaconda Smelter. There have been some additions to the house, but it definitely is in character with the houses in the area and the architecture of the neighborhood. A number of the homes in the area had a nice glassed or open sitting porch on the front, and I think your house did as well. Many were boarded up – like yours – where the front door is. There is a big open lot next to the house. Not sure if it was owned by the same family or not. I include a picture of that as well. If you face the house, the lot is on the left. I believe you can see the smelterman’s cabin from the vacant lot – way to the right in the photo of the lot, behind the main house at 804 E 3RD St and the garage is on the other side of it. 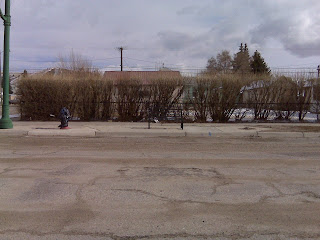 I've got this piece of paper with information about the family of my great grandfather, John Henry Golden. It was in a packet of information that was put together when Sharon Bullene was doing a school project. But, I don't know who typed up this page or where the information came from. This is what it looks like:

I started with tracing John Henry and Bridget in the U.S. Census records and was surprised to discover that Winnie and Margaret had also come to the United States.
The 1900 census record shows Winnie and husband Frank (Francis P.) Dolan and their 3 daughters, Mary, Winnifred and Margaret living in Anaconda, Montana at 804 E. Third St. John Henry and Margaret are living with them. Bridget and Frank O'Connell lived in Helena, Montana for the 1900, 1910 and 1920 censuses. In 1930, the family had moved to Portland, Oregon. Bee and Frank had 8 children. I cannot find any records of Margaret, or of Winnie and her family after the 1900 census.
I hadn't found any arrival records for the Goldens, or anyone in my mother's family. The problem is that the older arrival records have less information, which makes it harder to identify a specific person. But, Margaret Golden, sister of John Henry, arrived last of all her siblings, and I found her arrival record!
She arrived in New York on September 21, 1899 aboard The S.S. Majestic, which had sailed from Queenstown (Cobh), Ireland 7 days earlier. She was travelling with a cousin, John H. Finn, (age 20), and she is 20 years old at the time. It lists their last residence as Ballymote, Ireland, which is in County Galway, sort of halfway between Ballaghadereen (the Goldens' birthplace) and the city of Galway. (Hooray for Google Maps!) Other passengers on the ship have Ballaghdereen listed as their last residence. Their final destination is Anaconda, Montana, to join brother and cousin J.H. Golden, living at 804 E. Third St. !!
Here is the 1900 census record:

If you know anything else to add to this story, let me know!