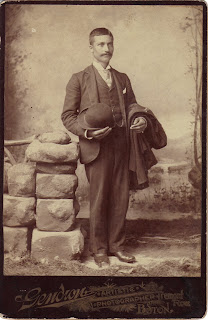 Recently I was contacted by my cousin, Mary Shamshoian, via Facebook (my new favorite genealogy resource!) and she had seen these pictures and had some of the same ones in her collection of family photos.  And hers had a name written on the back!!  Uncle Sahag Tatoian.  I did a quick look-up in the Dzeron Village of Parchanj book and saw that my great-grandfather Giragos Tatoian had a brother Sahag.  The book shows a + by his name, meaning deceased (at the time of publication, 1938), but also an asterisk, for which there is no explanation given.  That, plus the fact that he had his picture taken in Boston is all I know about him.  I cannot locate any records, so far.  I'll keep looking!
Giragos Tatoian and his wife Altoon had 3 daughters, Goohar (Pearl), Aghavni (Dovie) and Agnes.  Goohar, my great grandmother, married Tatevos Paloutzian; Dovie married Levon Garbedian; and Agnes married Soghomon Googooian.  Agnes was Mary Shamshoian's grandmother.
Posted by Michelle 3 comments:

Not everything in my mailbox is a bill!

Look what I got in the mail:
This is John Henry Golden's (1873-1949) death certificate from the county of Silver Bow in the state of Montana (Click to enlarge).  Of course, it didn't just arrive in my mailbox on it's own; I did have to send for this record.  The information on death records is only as good as what the informant knows.  In this case, the informant was Paul D. Golden, son of the deceased.  The year of birth given is 1872.  I have been using 1873, as that is what John Henry wrote on his naturalization papers.  Since I haven't been able to locate his Irish birth or baptism record, I don't know that I can verify which is the correct year.
John Henry's parents' names are also given; Tom Golden and Mary Coleman, more confirmation of that information.
The cause of death listed is apoplexy due to arteriosclerosis.
Other information includes his burial at Holy Cross Cemetery in Butte on 23 June 1949.
Posted by Michelle No comments: 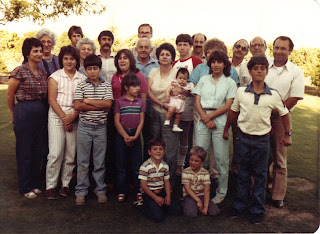