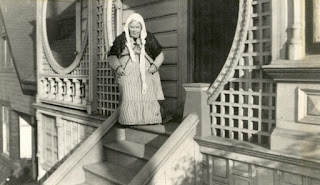 This is my great-great-great grandmother, Ann McLaughlin Doherty (1835-1915), who lived at 35 Elsie St. We believe that is the location of this photo. She is recorded at this address in the 1907 San Francisco City directory. She lived here until her death. Her son John continued to live there through the mid-1930's. Her daughter, Ann Doherty Coxe, lived next door at 33 Elsie with her husband Edgar and son William. She lived here until her death in 1921. In the 1930 census John is listed at 55 Elsie with his nephew William living next door at 53 Elsie. I am wondering if the street was re-numbered. In 1936, at the time of John's death, he was living with his sister Mrs. Elizabeth Levenberg at 55 Elsie.
Ann was born in Ireland, about 1835.  Her sister Kate also came to the United States and lived in San Francisco as well. Ann and her husband Roger Doherty had arrived in New York by 1861, for the birth of their son, William. Daughter Ann was born in New York in 1865.  Ann and Roger had four more children: Mary, Elizabeth, Lillie and John, all born in San Francisco, CA.  From at least 1880 to
after 1890 the family lived at 823 Harrison. Roger died in 1891 and was buried at Mount Calvary Cemetery, which was located between Masonic and Parker, and Geary and Turk.  He was later "removed" to Holy Cross in Colma, (no actual remains were found to re-bury).
Ann and family lived on Harriet St.; I found listings at both 17 and 45 Harriet.  After the 1906 San Francisco earthquake, the family relocated to the Bernal Heights neighborhood, which is the Elsie St. address shown in the picture above.
Ann's oldest grandchild was my great-grandmother, Claire Davidson Steele, a.k.a. Mammy (1897-1993).
Happy St. Patrick's Day to all my Irish family!
on March 17, 2017 No comments: