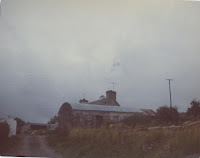 If any of you are interested in buying a piece of our ancestral homeland, you might want to check out this property.
I've been trying to expand my information for the Golden family and recently searched and purchased some records from the County Roscommon Heritage & Genealogy Company .  I previously had them conduct a search for records of John Henry Golden's birth, but they didn't find anything, but suggested that there might be records on other family members.  I was able to find the church marriage record for Thomas Golden and Mary Coleman who were married on 1 Dec 1866 in the parish of Ballaghadereen, Co. Roscommon.  They were Roman Catholic and the witnesses were Thomas and Mary Sharkett.  No other information was recorded.  I found civil birth and church baptism records for John Henry's siblings Winifred (1867), Brigid and her twin, Patrick (1871), and Margaret (1876).  All list the parents as Thomas Golden and Mary Coleman, Roman Catholics from Drumacoo, Ballaghadereen, Co. Roscommon, although Drumacoo is spelled all different ways (Dremacoo, Dromachro, Drimachoo, Dremecoo); that's just the fun of genealogy!  I can't figure why John Henry doesn't have any records.  If anyone takes a trip to Ireland (or wants to send me), I have a mission for you!  I have sent for John Henry's death record to see if it has any clues.
Winifred, Bridgid and Margaret all came to the United States, to Montana.  John Henry was listed as the destination on Margaret's ship arrival record, and Winifred, John Henry and Margaret were all living together in Anaconda in 1900.  Brigid married John Francis "Frank" O'Connell, lived in Helena, MT and moved to Oregon between 1920 and 1930.  After the 1900 census I have essentially no records for Winifred or Margaret.  I think Winifred died that year as I saw a mention about the administration of the estate of Winifred Dolan (her married name) in the Anaconda Standard in Sept. 1900.  She did have 3 daughters, Winifred, Mary and Margaret, but I don't know what became of them.  There aren't records available on-line to help figure out these mysteries.  Some library, cemetery and county record searches are the next steps.
on March 17, 2010 No comments: