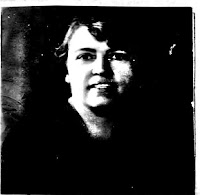 Ancestry.com has U.S. passport applications dated from 1795 to 1925 including this one submitted by our own Mame Towey! This is what it says:
I, Yonovera Towey, a native and loyal citizen of the United States, hereby apply to the Department of State, at Washington, for a passport. I solemnly swear that I was born at Providence in the state of Rhode Island on the 5th day of October 1878 and that my father, Patrick Towey was born in Ireland and that he emigrated to the United States from the port of Queenstown (Ireland) on or about October 1859; that he resided 42 years, uninterruptedly in the United States from 1880 to 1921 at St. Paul, Minnesota; and that I am domiciled in the United States, my permanent residence being at Chicago in the State of Illinois where I follow the occupation commercial traveller. I am about to go abroad temporarily; and I intend to return to the United States within 2 months with the purpose of residing and performing the duties of citizenship therein; and I desire a passport for use in visiting the countries hereinafter named for the following purpose: pleasure; France, Belgium, Holland, England. I intend to leave the United States from the port of New York sailing on board the S.S. Rochambeau on July 23rd, 1921. An oath of allegiance is signed 30 June 1921.
The reverse has a description and the picture above:
Age: 42 years, Stature: 5' 4", Forehead: high; Eyes: hazel; Nose: ordinary; Mouth: large; Chin: round; Hair: brown; Complexion: medium; Face: oval
The passport is to be sent to 334 Fourth Ave., c/o H.W. Gossard Co., New York City.
There is also a letter from Mame's sister, Dorothy Towey Titus, attesting to Mame's birth in Rhode Island.
on December 04, 2007