I connected with Bob Paloutzian (Harold Robert, son of Oscar and May, grandson of Manoug and Mary) through his granddaughter Lindsey on Facebook.  Lindsey is Ken Paloutzian's daughter.  Bob sent along some pictures of Manoug, Mary and their family.  The picture above, from left to right, Harry, Manoug, Pearl, Lucille held by Mary, and Harold.  Lucille was born in 1905, and the youngest, Oscar was born in 1907, so it is a good guess to say this picture was taken in 1906.

Here are Manoug and Mary's children a few years later, maybe 1910-11, if Oscar is 3 or 4 years old here.  In the back are Harry, Harold, Pearl, and in front are Oscar and Lucille.
This is Mary and Manoug with son Oscar.
Mary, in her 90's, with Harold, Harry and Oscar.
Here are Mary and Manoug with two of their grandchildren, Harold Robert (Bob), who sent these pictures to me, and Oscar James (Pat).  Pat and Bob are the sons of Oscar Asadoor, Mary and Manoug's youngest child.  I don't have any pictures of younger sister Betti; maybe she'd like to send me some!  This was taken about 1939-40, making Manoug about 79 years old and Mary about 69 years old. 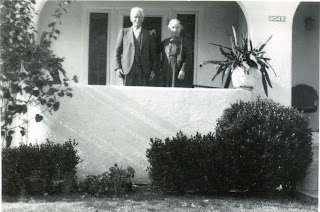 This picture was given to my father by Paul Parvanian, who was Mary's nephew.  (Paul Parvanian was Barbara Bujulian's father, for my Bujulian cousins.) You can see the address on the house as 2045; this is on Palm Grove Ave. in Los Angeles.  Here it is on Google Maps.  Use the Street View and see that it looks pretty much the same.  It is actually a duplex I think, as Manoug and Mary's address was 2047, according to Manoug's death certificate.  Manoug and Mary are buried side by side at Inglewood Park Cemetery in Inglewood, Los Angeles County.  My Mom and I got some pictures on our way to San Diego in June. 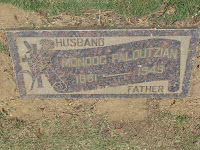 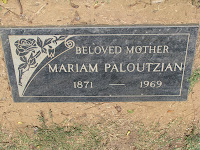 Read more about the Paloutzians who came to California from Turkey here.
Thank you cousin Bob for the pictures!  If anyone else has pictures they'd like to share, let me know!  I can help you scan them, if needed.
on July 10, 2010