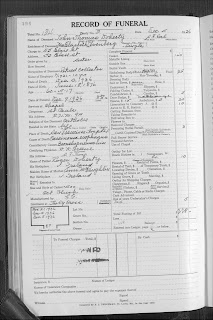 John was the youngest child of Roger and Ann Doherty, my great-great-great grandparents.  I did not have the date of his death, so it was great to find this record.  There is also a lot of information that I already had that is further confirmed by the same information in this record from the funeral home.  His parents' names are confirmed as Roger Doherty and Ann (McLaughlin) Doherty.  The order for the funeral was given by Mrs. Elizabeth Levenberg, John's sister, better know to us as "Peeps".  Their address is given as 55 Elsie St., San Francisco.  This is in the Bernal Heights neighborhood.
I had John's birth date from his WWI draft registration card and it is confirmed here as 18 Jun 1876.  He died at San Francisco Hospital of carcinoma of the esophagus and bronchopneumonia.  I found a record for one other relative, Blanche Davidson Rommel (1881-1949), the younger sister of Peeps' first husband (and my great-great grandfather), Ewen Davidson (1872-1898).  Ewen was Claire's (Mammy) father.  I'll keep looking!
on November 08, 2010