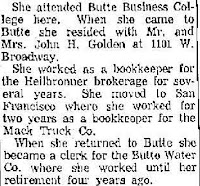 That just ties all the details together, doesn't it?  Her last San Francisco directory listing is in 1929, and in the 1930 census record she is back in Butte.  There is more to this story that needs uncovering though.  Family lore tells of a suitor she was not allowed to marry, and there are whisperings of a romance in San Francisco and certainly the Stock Market Crash of October 24, 1929 must have had a part in her return to Butte.  But sadly, no verifiable facts. Now, Anna and Marg's sister Christine died in Yakima, Washington in September 1929, but that doesn't seem like a reason she would return to Butte.  I also have questions on why she went to San Francisco in the first place.  It seems so far away, and I wondered what travelling there was like in 1926.
So, besides being the sister of Anna Golden, what does Aunt Marg's excursion to San Francisco have to do with the Goldens' connection to that city? Stay tuned for The Goldens in San Francisco, Part 2, coming soon!
on April 07, 2018